Mariah had a chat with the Etsy Craft Entrepreneurship instructor, Alaina Smith, and here is what she had to say:

Alaina: I grew up in Nashville, TN. My mom has been kindergarten a teacher for over 20 years. I went to Martin Luther King, Jr. Magnet in high school in Nashville. Upon graduation, I went to the University of Tennessee to study Studio Art with a concentration in Printing Making and Art History. 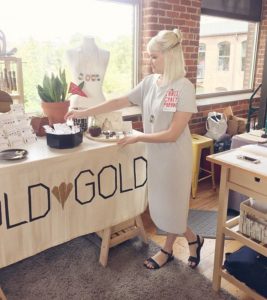 Mariah: Why did you decide to start working with Etsy?

Alaina: For a couple of years, it was something that I really wanted to do and I looked up to many of my friends who had success Etsy stores. I opened a business, Cold Gold, many years ago that focused on fashion design and sewing. I got involved with Knoxville’s Fashion Week for a while. Everyone that I know in terms of small business has had one failed small business. Cold Gold did not work out for me, but it was my first involvement with Etsy. I really liked the platform and the things that I was finding to buy on Etsy. I also had friend who educated me on the way, giving me tips and tricks, so when I was ready to open Cold Gold it was much more immediate since I knew more about what I was doing this time around. Etsy had come a very long way from where it had been. The platform evolves and gets easier to use as the years go on.

Mariah: What inspired you to begin working with Etsy, and specifically the Craft Entrepreneurship Program?

Alaina: Last year, I was a part of a small tam called Make Knox, and we worked closely with Etsy to plan and host the first Etsy Makers Summit in Knoxville. We called ours The Knoxville Makers Summit. It was the satellite program were people from thirteen to sixteen different cities went to Brooklyn to the Etsy Headquarters to support and grow their own artists and Maker communities in their own cities. When we came back, we began working on the summit. It was really cool working so closely with Etsy. They came to visit many times, and I met several people. Through that, I grew closer with Etsy, as well as, the KEC. When the Craft Entrepreneurship Program was mentioned, Joy, a member of the Makers Council and the former Director of Outreach for KEC, knew that it was something that I would be great at doing. 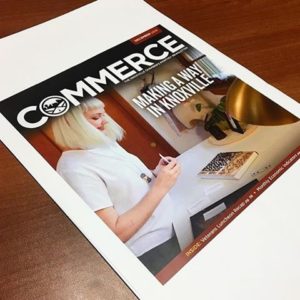 Mariah: One of the values of the program is to “turn your passion into a business”. How have you upheld this value?

Alaina: If you told me three years ago that this business would be my full-time job, I would have laughed. What I think that I am passionate about both within my business and with other people is being able to turn that passion into a business, and Etsy gives you that foot in the door more easily. Being able to work with this program is a nice way to find other people in our community who, not only want to learn how to use Etsy, but who can actually benefit greatly in different ways. They can benefit by being able to turn their passion into a business. They can benefit from being able to support themselves by having a steadier stream of income or extra stream of income which is how it started for me. I ended up being about to transition from my regular job slowly into my Etsy online platform. We are trying to find the right people who we think will impact in a really great way, so that is what I am really looking forward to. Seeing people’s passions grow into something that they can make money from is also something that I am looking forward to witnessing.

Mariah: You said that three years ago, you wouldn’t have believed that this is something that you would be doing so, when was your “ah-ha” moment?

Alaina: Etsy again! They contacted me about two years ago to participate in a platform of the tradeshow, New York Now in New York City. Etsy was a sponsor of this tradeshow. It was a big place for businesses to go to find new lines products to carry in their stores, art galleries, or wherever they would sell goods. Etsy had places for about twenty different artists to show them specially. Etsy build out our booths. They provided a discounted fee of entry because the tradeshows are crazy expensive! Just getting a booth is $5000 plus another $5000 to decorate and dress the booth along with staying in the city and travel. It’s crazy and it is a huge jump, but Etsy made it more affordable, build out our booths, helped us design things, and marketed us. I had another foot in the door towards being able to take wholesalers. In the course of four days, I took three wholesalers with thirty new clients and that was the jumpstart. I remember coming home and having to make this really elaborate schedule of exactly what I needed to make every single day for the next two months! It was crazy. Since then, I have been able to keep a lot of the same stores and clients. I’ve been able to continue selling through Etsy’s Wholesale Platform and gather new clients. Having the opportunity to go to the tradeshow was the big first jump because I wouldn’t have been able to afford it on my own.

Mariah: If you could change one thing about your personal brand or Etsy, what would it be if anything?

Alaina: As most small business owners and Makers could agree; it is extremely difficult not to be self-critical because you are the only person working for you. It is easy say think that you aren’t good enough at what you’re doing, and that is something that I would change. I think it could free up moments to jump forward faster. Having a couple of good people that you can count on too always be honest and tear the work apart is helpful versus having someone who will tell you that everything about the product is great. To encourage more honest feedback, I believe that the Knoxville community is creating a space for Makers to come together and having more consistent meetups to find each other and become more available. There are a couple of tiny kinks that I would change about the Etsy Wholesale site, but there’s nothing big or looming that I would change about Etsy.

Mariah: With this being the first program that you will instruct, in what ways do you expect to see growth in others, as well as, growth professionally and personally for yourself?

Alaina: The fact that I have no idea what to expect is what I am looking forward to the most. I have no idea what type of products people will bring or what level of knowledge the participants will have able business. I’m really excited just to see what they will bring to the table so that I can access their needs in that way. It will be a small enough class of about 20 people so that we can really dive into where everyone is and look at things more closely. I hope that their growth will come from being able to have a group of people around them who are doing the same that they are doing along with an instructor who has done all or most of it before. I know I will grow through this because saying things out loud will make you learn things more or make them more true. I believe that teaching other people about Etsy will definitely allow me to learn more about it and its processes. I will be able to look back at my own challenges again. At times when you move past a challenge, you don’t think of it the same way or see it as being as difficult as it was when you were actually working through it. Looking at other people who are in the beginning stages will allow me to go back in time and remember when I was working on the same things and they were difficult.

Mariah: What advice would you give someone who is aspiring to be in the Maker community?

Alaina: Get involved. Make stuff. Don’t be as self-critical as you want to be, just make it. There’s a quote by Ira Glass that says, “all of us who do creative work, we get into it because we have good taste. But there is this gap. For the first couple years you make stuff, it’s just not that good. It’s trying to be good, it has potential, but it’s not. But your taste, the thing that got you into the game, is still killer. And your taste is why your work disappoints you. A lot of people never get past this phase, they quit. Most people I know who do interesting, creative work went through years of this. We know our work doesn’t have this special thing that we want it to have. We all go through this. And if you are just starting out or you are still in this phase, you gotta know its normal and the most important thing you can do is do a lot of work. Put yourself on a deadline so that every week you will finish one story. It is only by going through a volume of work that you will close that gap, and your work will be as good as your ambitions.” Understand that the first things that you will make will not be up to your taste. I looked back on a couple of things from Art School that were really bad, but it made my work grow. I believe that my work will continue to grow and get better with even more time. 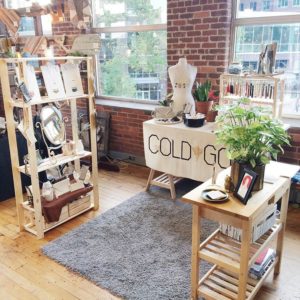 Mariah: If you could be anything else, other than the profession that you are in, what would you be?

Alaina: An interior designer. It would still be creative. I could see myself as one of those people who goes in your house and organizes everything. I really like order and I get a lot of satisfaction from cleaning things out. I could do pretty much anything to do with organizing.

Mariah: Would you like to add any additional information or fun facts for everyone?

Alaina: I think the program is going to be really fun and educational. Even if it is things that you may have heard before, it will still be the kick start to a business. Sometimes you need someone to kick you out of the airplane so that you can skydive and this may be that. I think that it will be something accessible and fun.